Melbourne, Australia is internationally known for its street art and its trams. Melbourne Street Art 86 imagines Melbourne's 86 tram route as though it were a giant open air gallery of street art with its own regular tram service. The pages in the dark blue side bar below have photos of street art by the suburbs the tram passes through. Locations are noted by tram stop, street location and also on maps of the area that can be downloaded or printed. Other Melbourne suburbs rich in street art are also featured.

Take me to the site guide and quick gallery of street art CLICK HERE.
Tell me more about the 86 tram & sights along the way CLICK HERE.

Travelling on the 86 tram

Note: Click on any image to see an enlarged version 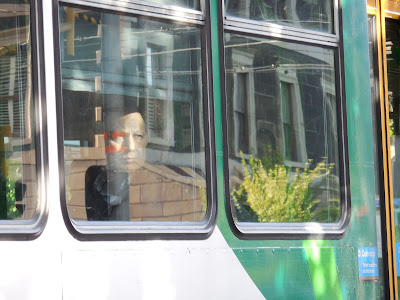 I may be biased, as the 86 is the tram I have taken to and from work for a number of years now, but after living in many parts of Melbourne over the past 25 years and being a frequent public transport user, I find it the most varied, interesting and enjoyable tram route to travel on in Melbourne.

The tram itself is usually a segmented double car with good air conditioning. As with all Melbourne public transport, it does get crowded at peak times, but at other times of the day it can be spacious and relaxing - a great route to take a book on and peer out over the pages to see the sights from time to time.

For those not familiar with the 86 tram (or visitors to the site from further afield), the following sections give some practical information about the route, a description of the Melbourne suburbs the tram passes through on its journey, and an overview of some of what there is to see along the way, illustrated with a series of photographs. I have featured attractions and sights a little like a tour brochure, but the route passes through a living city in constant transformation, and some suburbs have mixtures of well heeled and trendy locations and plainer or grungier aspects.

The tram commences its journey in the Melbourne Docklands and terminates about 15 km from the city centre in the outer suburb of Bundoora. The journey can take over 90 minutes during the morning and early evening, with the City of Melbourne and Smith Street sections usually taking the longest during peak times.

Understanding tram stops
The stops are first numbered in an odd sort of way from the Docklands D11, D10, D2, D1 and then 119 and 120. This because the tram route was extended, first in 2000 to the new Docklands stadium (now Etihad Stadium) and then in 2008 to the Docklands residential and retail development of Waterfront city.

Once you reach the Spencer Street stop, they commence from 1 and continue to 71, at the end of the line. There are some instances of missing tram stop numbers. This is due to the construction of accessible tram stops, during which some minor stop locations in the upper part of Bourke Street in the City of Melbourne and High Street, Northcote were merged into one major stop that is accessible for people with special needs. 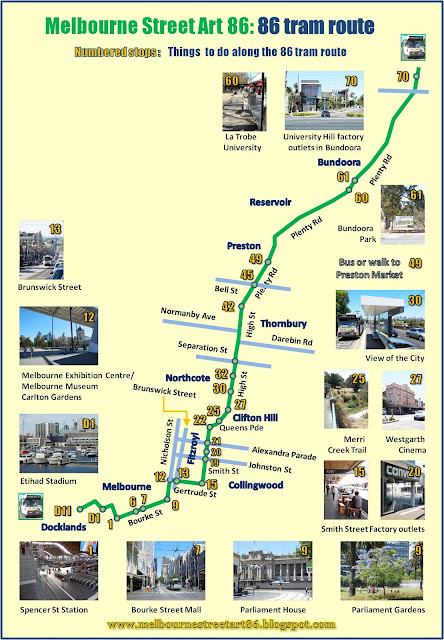 A pdf version is available here: Melbourne Street Art 86 - Basic 86 tram route map. The pdf also has the list below of  things to do and see (as well as see street art) at stops along the way. 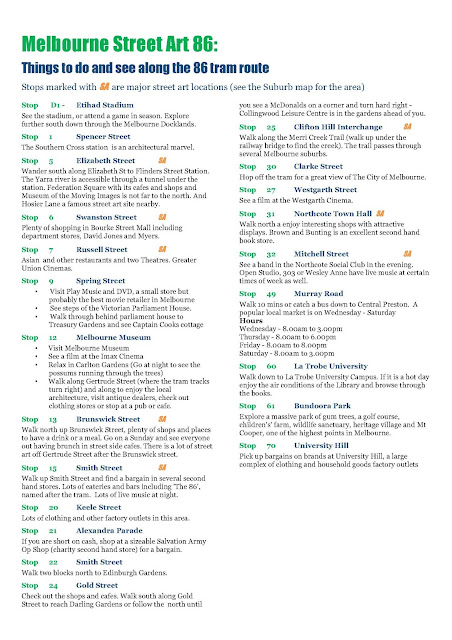 Your journey on the 86 tram

Docklands
The 86 tram commences its journey from the Melbourne Docklands (stops D11, D10, D2, D1), before passing along Spencer street on the western side of the Central Business district (stops 119, 120).


City of Melbourne
It turns left into Bourke Street at the Main Regional rail station of Southern Cross (stop 1).

It passes through the city of Melbourne along Bourke Street (stops 1-9) - together with Swanston Street - one of two major roads that intersect the City of Melbourne at right angles and meet at its centre.

At the Victorian Parliament House in Spring Street (stop 9), the 86 turns north.

It runs north for about about 1km, leaving the City of Melbourne, passing the Carlton Gardens and turning once more just before the Melbourne Exhibition Centre and Melbourne Museum (stop 12).

Fitzroy
After turning east it runs through Gertrude Street, skirting the lower edges of the suburb of Fitzroy (stops 12-15).

In its journey through Fitzroy, the 86 crosses the lively and very popular Brunswick Street (stop 13). where there are many restaurants, bars and specialty shops (112 tram in distance).

Collingwood
After skirting along the edge of Fitzroy the 86 tram turns north once again at Queens Parade, passing through the inner city suburbs of Collingwood (stops 15-21), Clifton Hill and Northcote. These suburbs are among the most vibrant and interesting parts of Melbourne with bars, restaurants, shops and cultural centres and amenities, most to be found in Smith Street in Collingwood and High Street in Northcote. 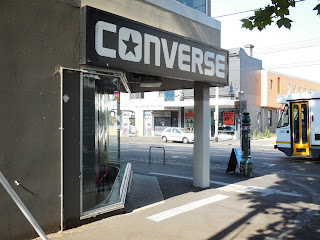 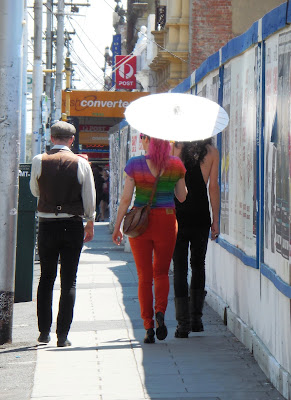 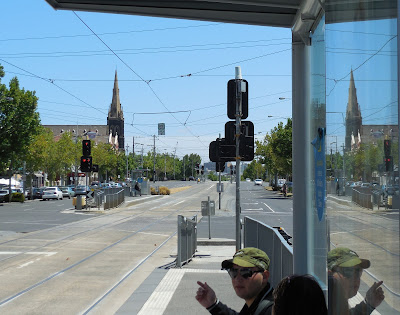 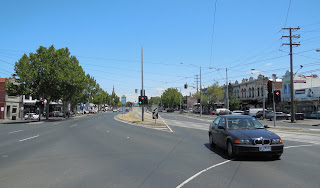 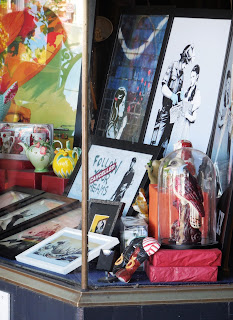 Northcote
Arriving at the lower edge of Northcote it is hard to miss two 19th century cannons, one on each side of the elm tree avenue that leads to lower Northcote (stop 26).


Lower Northcote (some times refered to as Westgarth) (stop 27) has a cinema, interesting shops and cafes.


After leaving the lower part of Northcote tram begins to ascend a steep hill and the buildings of the CIty of Melbourne come into view behind. There is a great view of the city from stop 30.


The upper part of High Street Northcote has a number of colourful and attractive shopfronts, particularly between stops 31-33. 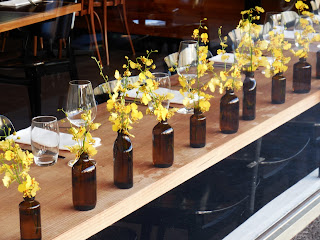 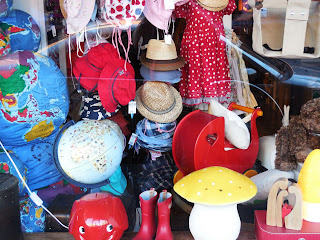 And a number of bars and music venues. 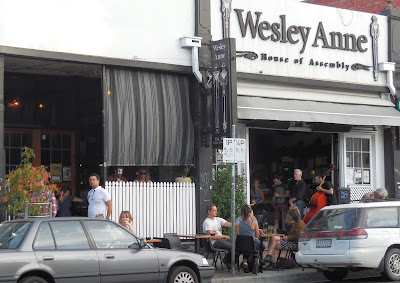 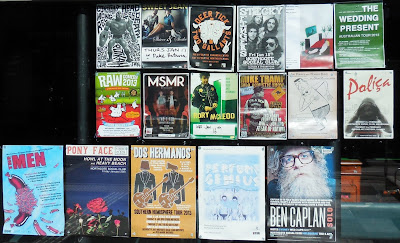 After Northcote, the 86 passes through Thornbury (stops 36-42), which is quieter and more suburban in nature than Northcote, but it can be interesting for a Melbourne visitor as it still retains some of the flavour of what the inner Melbourne suburbs were like ten or fifteen years ago. There are still local stores that have not been superseded by hipper varieties and cool watering holes. It also has some interesting specialty shops and some great places to eat dotted along the route. 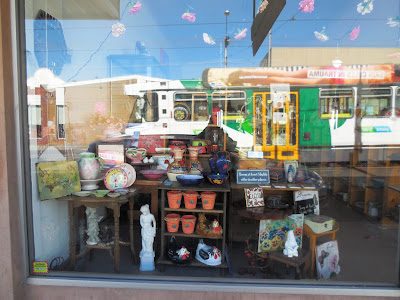 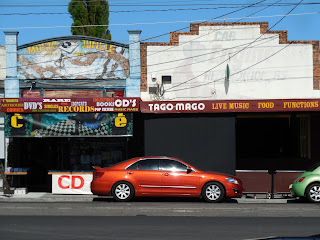 As the 86 leaves Thornbury and enters Preston (stops 42-52), the route becomes increasingly suburban - the tram does not pass through the centre of Preston, where there is a lively high street and a popular market, but a ten minute walk west from the Bell Street stop will take you there. The Preston part of the journey has shops and businesses along the route, but is primarily a residential area. 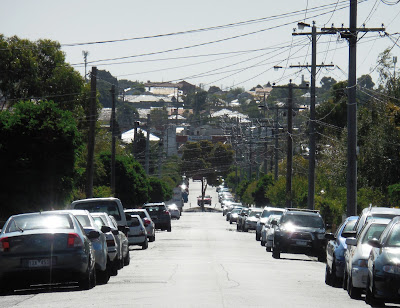 Beyond Preston the 86 passes along the edge of the suburbs of Reservoir and Kingbury (stops 52-60), here the first part of the journey is urban. 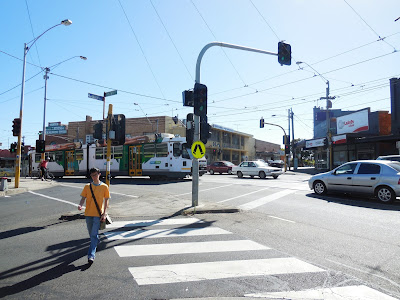 Though leafy residential areas are not far from the tram route. 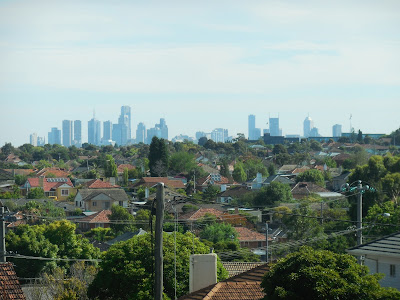 But the landscape soon opens out where Plenty Road turns into a highway. 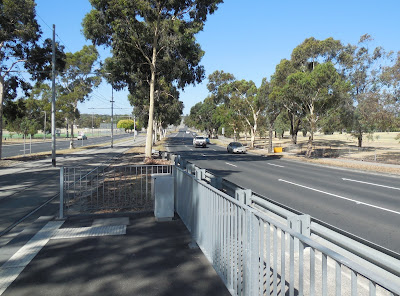 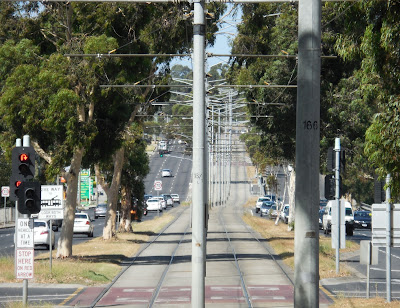 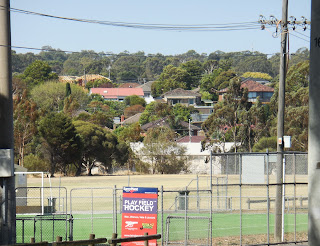 And then passes the Latrobe University campus (stop 60) when entering its final suburb of Bundoora. 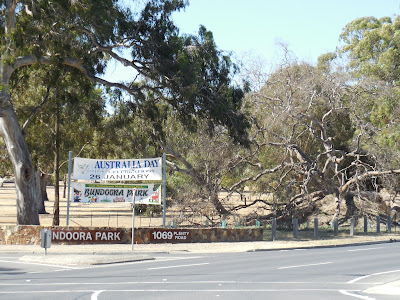 Finally the 86 passes through the residential and shopping area of Bundoora... 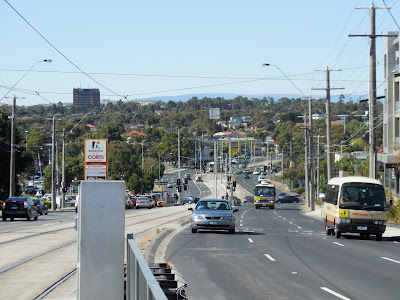 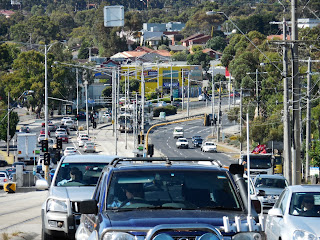 ... before terminating at the RMIT Bundoora East campus (stop 71) about 15km from the city centre. 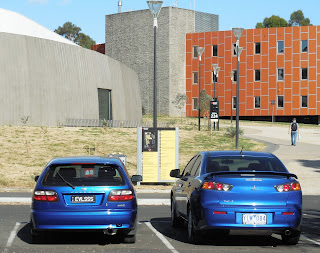 The 86 is also one of the most interesting tram routes in Melbourne on which to be a passenger. There are often many colourful characters travelling with you and you just never know what you might see. 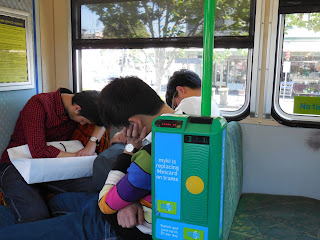 Return to top of page

Street Art on the 86 by Suburb